MSQPC consulted with the City of Germantown over a 5 year period to conduct a Baldrige-based Assessment, training their workforce on Lean Six Sigma methodology, presented numerous workshops on Root Cause Analysis (RCA) problem solving methodology, and presented the Process Activated Training System® throughout City Government to develop formalized On-The-Job Training (OJT) training scripts for over 1000 of their Standard Operating Procedures (SOPs).  The City of Germantown's work with MSQPC led them to apply for and ultimately winning the nation’s top quality/productivity award.

The City of Germantown, Tenn., located just east of Memphis, established a defining goal: Excellence. Every Day. Residents and visitors say Germantown is one of Tennessee's most vibrant, attractive, and safe residential communities. Its low crime rates, high bond ratings, short emergency response times, and focus on education attest to the city's commitment to excellence. 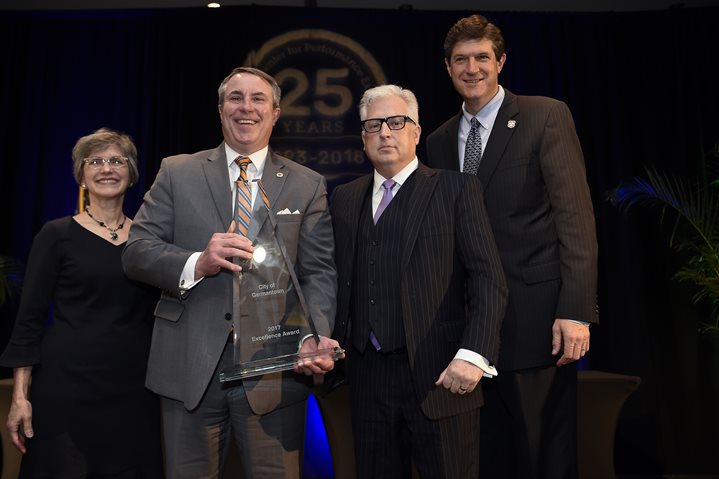 Dr. Donn Fisher, Executive Director/CEO of MSQPC, gave a speech during April of 2010 before City of Memphis government officials regarding reengineering government by using the Baldrige Criteria to self-assesses the various Divisions of City of Memphis government.  In the audience that day was the City of Germantown Mayor Sharon Goldsworthy and Patrick Lawson, City Administrator for the City of Germantown.  After the speech they invited Dr. Fisher to present information to them regarding the possibility of conducting a Baldrige-based Assessment for their city.  They liked what they heard and invited center staff to conduct a city-wide Assessment.

The interviews were conducted on April 2010 and consisted of three levels of city government starting with (Level 1) interviews the Mayor and all of her direct reports, following with (Level 2) interviews of all their Managers, Directors and Supervisors, and (Level 3) interviews of selected front line staff.  The team interviews were formed around the 86 questions within the seven Baldrige Criteria for Performance Excellence categories, and were focused on the Global Reporting Initiative (GRI) Index which addresses the triple bottom line issues of economic, environmental and social corporate sustainability planning initiatives that were being conducted throughout the City of Germantown.

Individual documents were requested during the interviews and 718 documents were reviewed, including documentation listed on the City’s website to help establish credibility of the interview data and to gain further insight into the dynamics of the City of Germantown government.  The final analysis of the interview and documentation data against the 2009-2010 Malcolm Baldrige Criteria for Performance Excellence and the compilation of results were conducted over 280 hours by Dr. Fisher and the MSQPC Team.  The findings were presented in a 318 page report.

After the assessment was complete and delivered to the Mayor and her direct reports, MSQPC was invited to help the city transform their services into a Baldrige-based city government.  Over the next several years MSQPC introduced the City of Germantown to the Lean Six Sigma process and trained and certified numerous city employees to become black, green and yellow Belts.  MSQPC introduced a formal On-The-Job Training (OJT) System, known as, Process Activated Training System®(PATS) that was developed by Dr. Fisher for the United States Postal Service (USPS) and was being used nationwide.  In addition, MSQPC presented numerous Root Cause Analysis (RCA) Workshops and brought in a national presenter from the American Society of Quality (ASQ) to present the training throughout city government.

In addition, MSQPC consulted with the City of Germantown in writing their first Level 4 application that was submitted to the Tennessee Center for Performance Excellence Award Program (TNCPE) during July of 2012.  The City ultimately won the TNCPE Top State award in 2017 and was recognized at the TNCPE Awards Banquet in Nashville on February 21, 2018.

Did you know that the Greater Memphis Chamber offers its members a discount for Lean Six Sigma Institute training and certification? To sign up and learn more about this member benefit, click here.