The Greater Memphis Chamber Chairman’s Circle is a group of more than 145 C-suite business leaders working to spur economic growth, develop the workforce, and improve the business climate throughout the region. Learn more about the group and its task forces here and follow the Chairman’s Circle on LinkedIn.

Jason Gillum is the President & CEO Of Millennium Search, a boutique staffing and recruiting firm he founded nearly 20 years ago. His company specializes in staffing qualified candidates from C-suite to hourly labor for contract, contract-to-hire, and permanent positions, out of three offices covering Mississippi and Tennessee. Today, Millennium Search employs more than 40 internal full-time employees and 800 W2 contractors and associates across the country. 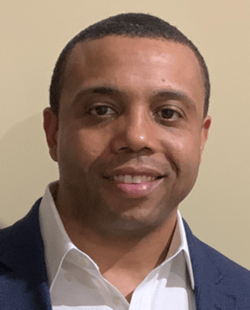 Jason was born in Allentown, PA, but says, “I give credit to the (901) for raising me to be the man I am today.” He also has Jamaican roots; his mother is from Kingston, Jamaica, and he still has family there. After graduating from the University of Memphis with a Bachelor of Business Administration and Management, he worked in the FedEx hub. Then he tried sales for several years, first selling mobile phones and solutions, and then when he applied for a second sales position, a mistake turned into an opportunity. “True story: I saw an ad in the Commercial Appeal for a sales job. I transposed the last two fax numbers, and my resume went to Robert Half International, a recruitment firm.” Four interviews later he landed a job with Robert Half which helped him develop the knowledge and skills needed to start his own recruiting company.

“Millennium Search has placed tens of thousands of contractors and associates over the years with great companies. There are several contractors I personally placed when I started Millennium Search. They have been promoted to senior level roles and some even became clients. That’s where I get my satisfaction. Knowing that I placed someone in the right role for our client.”

When it comes to the Chairman’s Circle, Jason says, “it’s an honor to be in the company of some of the best and brightest CEO’s and community leaders. There is such a passion amongst us to really move Memphis forward. We are doing a lot of heavy lifting because we care and are committed to putting a big spotlight on our city. Memphis is on the cusp of a significant breakthrough. Our city has so much going on in the realm of economic development. If we can just come together as one “901” and spread the love and wealth, we can be number one in several positive categories. It’s going to take some hard work, but I believe we are getting closer to seeing our true potential as a city.”

Jason is currently on the board of Junior Achievement of Memphis, AutoZone Liberty Bowl, and the Germantown Education Foundation. He previously served on the boards of the Economic Club of Memphis and Ronald McDonald House of Memphis.

Jason and his wife have four beautiful daughters: 11-year-old identical twins; a six-year-old; and a three-year-old. They enjoy traveling together anywhere there is warm weather and water.

Jason adds, “I would just like to thank our clients, candidates, and employees over the years. You gave me an opportunity to earn your business and I do not take that lightly. I am honored and humbled for all you have done for me and Millennium Search over the years.”