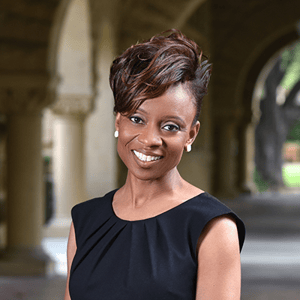 Dr. Jennifer Eberhardt is widely considered one of the world’s leading experts on racial bias. She is a professor of psychology at Stanford and a recipient of a 2014 MacArthur “genius” grant. Dr. Eberhardt has been elected to the National Academy of Sciences, the American Academy of Arts and Sciences, and was named one of Foreign Policy’s 100 Leading Global Thinkers.

She is co-founder and co-director of SPARQ, a Stanford Center that brings together researchers and practitioners to address significant social problems. SPARQ not only addresses social problems in the area of criminal justice, but also in health, education, and business.

With SPARQ, Dr. Eberhardt has worked with the Oakland Police Department on improving police-community relations. California’s former Attorney General, Kamala Harris, and the Department of Justice used pilot versions of her trainings on implicit bias to develop a statewide training program for law enforcement officials. She is also part of a federal monitoring team overseeing the New York City Police Department’s reform efforts in the aftermath of a judge’s ruling to end controversial “stop and frisk” practices.

BIASED: Uncovering the Hidden Prejudice That Shapes What We See, Think, and Do is the first book from Stanford social psychologist, Dr. Jennifer Eberhardt.

In BIASED, Dr. Eberhardt presents her ground-breaking and often shocking research and data on an urgent issue and demonstrates how our unconscious biases powerfully shape our behavior, leading to racial disparities from the classroom to the courtroom to the boardroom. She reveals that all people are vulnerable to racial bias, even if they are not racist. Using scientific research and powerful stories Dr. Eberhardt discusses:

•    Why the potential for bias is present in all of us, even the most open-minded.
•    A new framework for a volatile topic by connecting racial bias with the scientific study of the brain.
•    The bias that associates black people with criminality: how it creates devastating disparities between blacks and whites in our criminal justice system, but also in society as a whole, including a person’s professional, housing, and education opportunities.
•    How businesses are beginning to address the problem of unconscious bias. Dr. Eberhardt uses companies like AirBnB, NextDoor, and Starbucks as case studies for how successful or unsuccessful these initiatives have been so far.

The topic of racial bias can be difficult and uncomfortable to discuss, often inspiring reactions of tribalism, resentment, blaming, and suspicion. By examining bias using a scientific framework while giving due consideration to the historical weight and centrality of the problem in our country, Dr. Eberhardt offers practical, actionable suggestions for reform. Given unprecedented access to data, including footage from police body cameras, Dr. Eberhardt has worked with law enforcement across the country in an effort to equip them with the tools they need to detect and resist their own biases. She has also acted as a consultant on the anti-bias initiatives of several large companies.

Refusing to shy away from the tragic consequences of prejudice, Eberhardt addresses how racial bias is not the fault of or restricted to a few “bad apples,” but present at all levels of society in media, education, and business. Eberhardt reminds us that racial bias is a human problem—one that all people can play a role in solving.

Join us for an exclusive breakfast June 19 at the Memphis Botanic Gardens with Dr. Jennifer Eberhardt as she unpacks her book BIASED, offering insights into the dilemma of unconscious bias and recommending a path forward.

To find out more about Jennifer Eberhardt please visit her website at: jennifereberhardt.com