Reported by the U.S. Bureau of Labor Statistics (BLS), while the April 2020 unemployment rate for the Memphis MSA rose higher than its previous January 2010 peak, the Memphis metro has seen less dramatic impact to unemployment compared to other metropolitan areas across Tennessee. Unemployment in Memphis for April, the latest reported figure from the BLSs for metropolitan areas, was two percent lower than the April figures for the nation and the state of Tennessee, and nearly three points lower than the Nashville metro area.

The sectors that anchor the Memphis economy, including agriculture and logistics, saw less job loss over the month March to April 2020. While we anticipate some continued increases to unemployment over the coming months, if this over-the-month trend continues, Memphis may be slightly better positioned for recovery than many of its inter-state peers.

A silver lining in the bleak unemployment numbers reported for April is that the Memphis MSA is faring better than its Tennessee peers in terms of volume of lost jobs in March and April.

Locally, the unemployment rate for the Greater Memphis MSA increased by 8.9 percentage points to 12.7 percent in April 2020, reported by the BLS. This is higher than the previous peak of 10.8% in January 2010 by 1.9%. The number of unemployed persons rose by 51,370 to 76,221 in April 2020. Shown below, the preliminary estimates for the United States, the State of Tennessee, and major metropolitan areas within the state are highlighted.

To provide context into impacts by industry sector, the BLS reported that total nonfarm payroll employment fell by 65.7 thousand to 588,500 from March to April 2020. The April over-the-month decline has brought employment to its lowest level since September 2010. Job losses in April were widespread, with the largest employment decline occurring in leisure and hospitality. From March to April 2020, employment in leisure and hospitality plummeted by 30.2 thousand, or 43.8%. Employment declined by 9.9 thousand (-5.6%) in Trade, Transportation, and Utilities and fell 7.1 thousand (-7.8%) in Professional and Business Services in April.

Across the United States, recovery has not yet occured. However, a key indicator to watch will be the amount of time is takes for our market to return to previous levels of employment, relative to peers. Illustrated below, we highlight the road to recovery from the previous economic downturn of the Great Recession. Measured in months on the horizontal axis, the Memphis MSA did not return to its September 2007 peak level of employment for 125 months or January 2018. This is in stark comparison to the same peers highlighted above, where it took the United States and the State of Tennessee 77 and 75 months to return to their previous peak levels of employment, respectively.

The Road to Recovery: Comparative Job Growth since Pre-Recession Peak 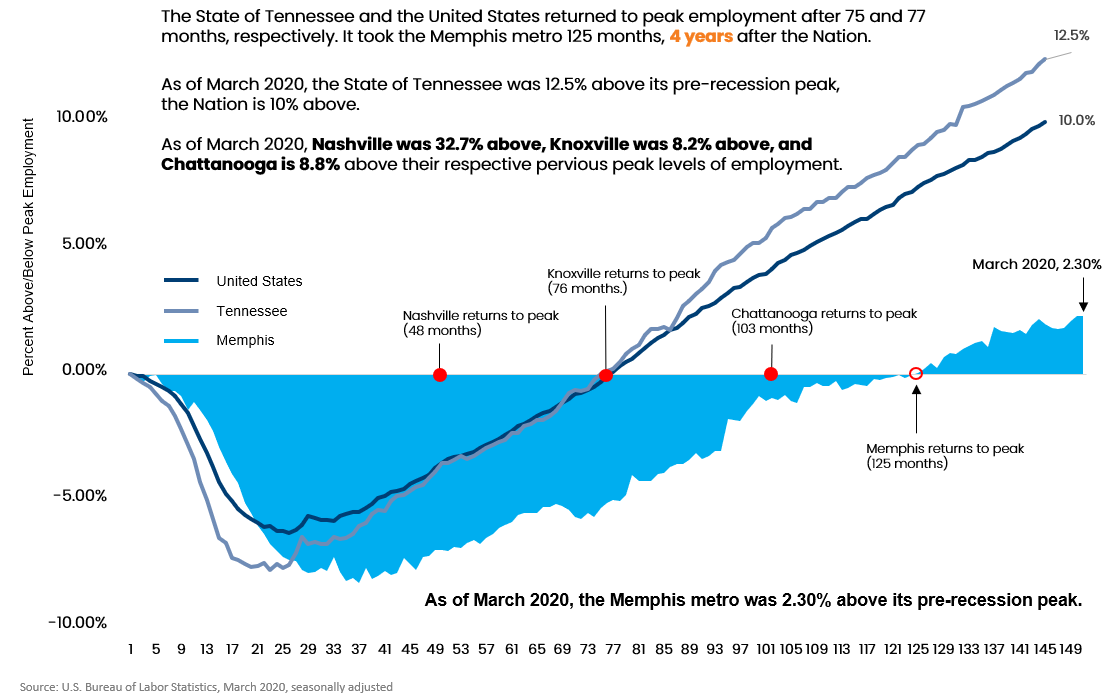 Preliminary Estimates from the State, May 2020

Stated above, as the market begins to establish a new baseline of growth moving forward, monitoring the return to previous levels will be a key ingredient to recognizing a recovery. Additionally, illustrating new opportunity pathways for displaced workers will aid in the effort to reactivate the recently unemployed population. For information on immediate job openings in the market, see below.

Released on June 25, the Tennessee Department of Labor and Workforce Development released preliminary estimates of May 2020 figures. While separate from the national estimates, state estimates of local/regional conditions can often provide a unique lens into the dynamics that are happening locally.