The conversation around economic development is not new. People have been working on this in Memphis for decades – but the national conversation got a lot louder when Amazon sent out an open call for cities to compete for their newest North American headquarters last fall.

We may not be Amazon’s next home, but based on an energized, growing millennial population, revitalization around the city and many other factors, we believe that Memphis has momentum, and we want to seize this moment for our city.

Several economic development initiatives are underway in Memphis right now, including Mayor Strickland's 800 Initiative to bolster minority business, Epicenter's work to boost local startups, including bringing Rise of the Rest to Memphis, and multiple studies to assess our economic development ecosystem. As we continue the conversation around how to make our city an even more desirable place to do business, we wanted to break down a few key terms to make this issue easier to understand.

This week, we’re covering incentives – the tools we have to attract companies to Memphis. A few days ago we explained TIF (Tax-Increment Financing) Districts, and today we’re talking about PILOTs (Payment-In-Lieu-Of-Taxes).
A PILOT is a tax incentive designed to restructure the tax burden for companies who are interested in relocating or expanding in Memphis or Shelby County. The goal is to attract jobs and economic growth for the area. Instead of paying 100% of the property taxes on their desired location, companies who are awarded PILOTs pay taxes at around 25% of that rate.

…but really, the “payment” is not “in lieu” of anything. Confusing, right?

Companies who are granted PILOTs are simply receiving a 75% discount on their property taxes (a tax abatement) in exchange for agreeing to locate in an area for a guaranteed number of years, bringing jobs and investment with them. 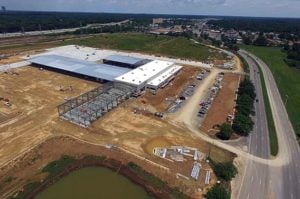 TAG Truck Center under construction at the former Mall of Memphis site on American Way. This PILOT project opened in 2018.

Like any financial incentive, the PILOT program has its critics – but an important thing to understand is that the properties these companies are taking over have often been vacant for decades, therefore gaining little to no property taxes at all. So, any new revenue – even if it’s only 25% of what a multi-million dollar company would have paid at full price – can still amount to hundreds of thousands of dollars in brand new revenue for the city and county that would not have existed otherwise.

We don’t have to imagine this as a concept in Memphis. In 2004, the former Mall of Memphis was demolished on American Way. That property sat vacant for more than a decade, producing less than $77,000 in annual City/County property taxes.

After receiving a PILOT in 2016, TAG Truck Center transformed the site into their new home as the area’s preferred commercial truck supplier, including sales, service, parts, a premium body shop, and an on-site technician training facility that will create job opportunities for the surrounding community.

The length of time this tax abatement is active has been widely varied in Memphis and Shelby County over the years, but right now, PILOTs in Shelby County typically range from three to 15 years. After that time, companies pay 100% of their property taxes.

There are several organizations in Memphis and Shelby County that are able to grant PILOTs (list below). The details of the application and award process are slightly different for each, but are generally based on the company’s wages, job numbers, and investment level. An agency can require a company to create a certain number of jobs, locate in a specific area, commit to spending a certain amount with City/County certified minority-owned businesses, or build for a specific industry (e.g. retail, office, multi-family residential, industrial, or distribution) in order to receive incentives. The length of the PILOT is evaluated individually for each project.

This is a high-level overview of a very complicated system. There are a multitude of variations to PILOTs that may be applied on a case-by-case basis, and different organizations have different guidelines to follow in granting these incentives. For a more in-depth look at some of the specific PILOTs awarded in Shelby County, the Memphis Business Journal is producing strong reporting on this topic - click here to read their latest piece.

Stay with us and look out for future posts on the tools Memphis uses to stay competitive in the fight for economic development.

Sources: EDGE
Photo: High Ground NewsThis post is part of a Chamber series explaining the pieces, players, and processes behind growth in this city. It’s an exciting time to be in Memphis – click here to read more and join the conversation.