A New Day for Mobility in Memphis 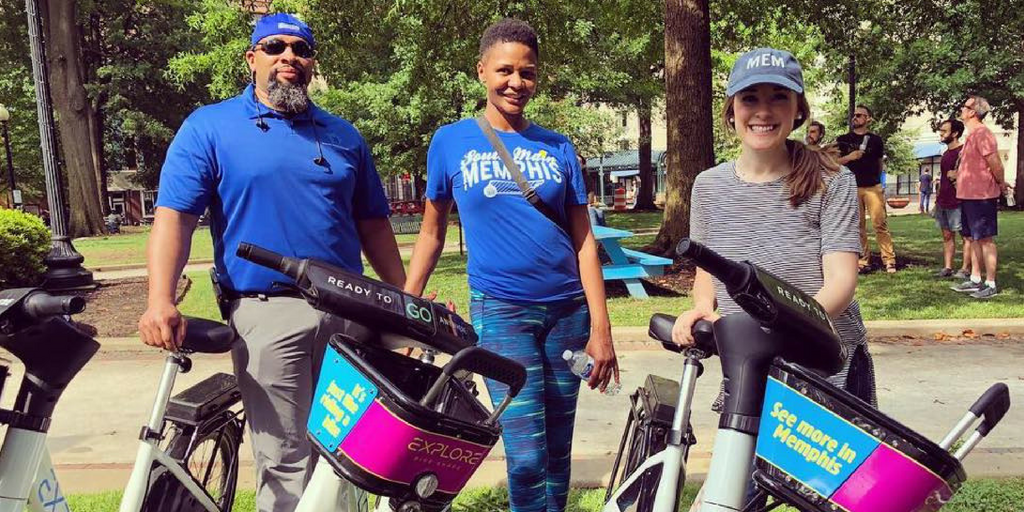 If you live near one of the 60 stations Explore Bike Share has installed in Memphis this spring, you may have noticed them come to life last week as 600 bikes were distributed throughout the city during The Big Roll-Out, the official launch of Memphis' first bike-share system.

The Memphis program is the largest system to date launched by BCycle, one of a few companies nationwide who provide the complex infrastructure needed to implement a bike sharing system, from bicycles and docking stations to technology and customer service.

Memphis is the 50th city the company has launched in 10 years and part of a much larger nationwide trend. A recent report by the National Association of City Transportation Officials says that residents and tourists in US cities took 35 million bike-share trips in 2017, up 25 percent from the year before.

Bike share programs aren't just widespread in places like New York and Chicago - Birmingham, Nashville, Cincinnati, Oklahoma City, and Fort Worth are just a few of the smaller cities nationwide who are capitalizing on this trend. Our neighbors in Germantown also launched two bike share stations last month, operating on a different software system.

Residents and tourists in US cities took 35 million bike-share trips in 2017, up 25 percent from the year before. Birmingham, Nashville, Cincinnati, Oklahoma City, and Fort Worth are just a few of the smaller cities nationwide who are capitalizing on this trend.

"BCycle is a bike share system that’s revolutionizing the way people use public transportation," the company says. "Bike share is a unique solution to the environmental, health, and transportation infrastructure challenges that face modern communities ... [we want to] make riding the easiest and most enjoyable part of people’s day, and an incredibly impactful part of your public transportation network."

Funding for the program comes from a partnership between the Memphis Convention and Visitors Bureau and BlueCross BlueShield of Tennessee, along with grants and contributions from individuals and corporations including UTHSC, Methodist Le Bonheur Healthcare, the Downtown Memphis Commission, and more. Sponsorship options are also available, including a $200 Pay It Forward annual membership that also provides an annual pass for a Memphian in need of access to transportation.

The impact of bike sharing in Memphis will be multi-faceted, from addressing the workforce issues that come from a lack of reliable transportation to giving individuals the opportunity to #SeeMoreInMemphis with a new perspective. At last week's press conference, BCycle President Bob Burns compared riding a bike through a city for the first time to the difference between seeing a river from the shore or by boat - the views are incomparable.

You don't need to be an experienced cyclist to participate. Anyone who knows how to ride a bike will be able to use one of these simple, sturdy bicycles, complete with a basket, several gears for different elevations, and a bell to use in traffic.

Explore Bike Share's 60 stations are located throughout Downtown, Uptown, Mud Island, The Medical District, South Memphis, Midtown (including Cooper Young and Overton Square) and Orange Mound. There are also two stations across the river in West Memphis. A grant is already in the works to launch another 300 bikes and 30 stations next year, with a goal of connecting as many Memphians as possible to affordable transportation.

Purchase a membership from a station kiosk, online, or at the Explore Bike Share office. You can choose a single-use, weekly, monthly, or yearly plan.

Using your membership card, app, or user ID, check out a bike from any of the 60 stations. The Explore Bike Share app shows how many bikes are at each station.

Go Explore! Each ride is 60 minutes long, so if you need to ride longer, check into a station each hour or accept the charge of $4 for each additional 60 minutes. A lock is incorporated into each bike in case you need to make a stop during your ride, but your check-out clock will still be moving even if you aren’t. Each bike is equipped with GPS sensors.

Dock and lock your bike at any station with available space. Check the screen to make sure your ride has ended.

BCycle President Bob Burns compared riding a bike through a city for the first time to the difference between seeing a river from the shore or by boat - the views are incomparable.

This project began in Memphis three years ago with an entirely local advisory board made up of partners representing interests in transportation, health, government, community and economic development. From the beginning, the organization's leadership felt that the task of establishing whether bike share was feasible in Memphis didn't need to be conducted by an outside party. Initial efforts relied heavily on listening sessions with the communities the system would eventually serve.

As far as the business community is concerned, mass transportation infrastructure and ultimately, a workforce that has access to reliable transportation is a critical consideration for future and existing companies in Memphis. Not only will this program provide new leisure activities for tourists and locals, it is also a huge step in the right direction toward affordable access to transportation for all.

As City of Memphis COO and Explore Bike Share Board Chair Doug McGowen said at the launch press conference: "It's a new day for mobility in Memphis."This post is part of a Chamber series explaining the pieces, players, and processes behind growth in this city. It's an exciting time to be in Memphis - click here to read more and join the conversation.