10 Reasons to Live, Work and Invest in memphis 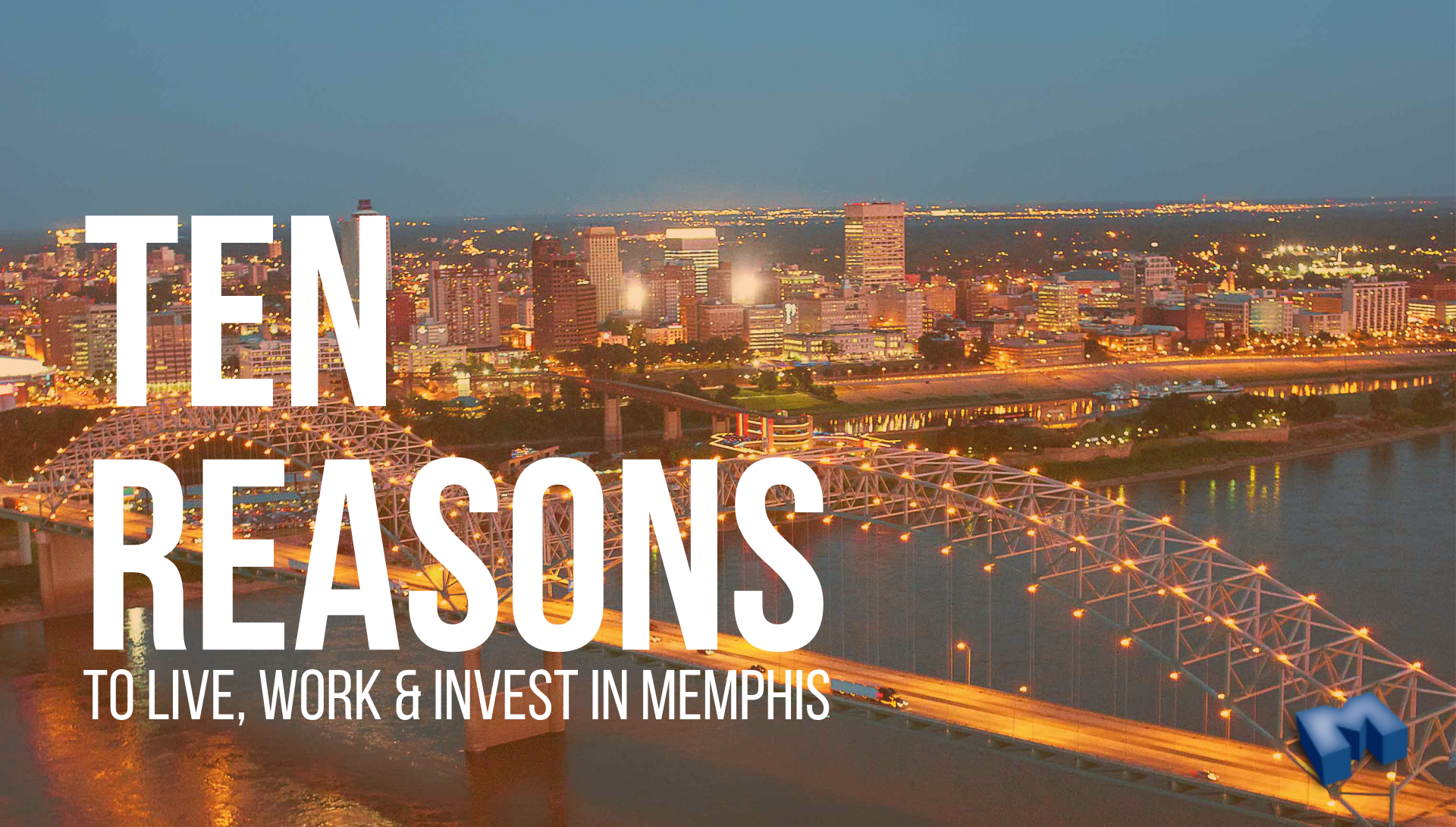 With more than $19 billion in projects are planned investment or underway across Memphis, Memphis is a city with momentum. In Downtown Memphis alone, more than $5 billion in new development projects are underway. Find out more about why more companies are choosing to call the Greater Memphis region home.

ten reasons to get Invested in MemphiS

With one of the southeast’s youngest populations, Memphis has become a destination for the next generations of talent interested in making its mark.

Memphis has seen a nearly 10 percent increase in its share of 25-36-year -old residents. Young people are flocking to our city and it is no surprise because we are home to the number one place to work for Gen Z – St. Jude Children’s Research Hospital.  Timemagazine says we are one of the top five cities for Millennial population growth. And guess what? Those Millennials must like it here because they are putting down roots. Memphis has the third largest share of Millennial homebuyers in the country according to a 2017 study by realtor.com.

Low debt and a pro-business regulatory environment make Tennessee one of the most business-friendly states in the country. A right-to-work state with no personal income tax on wages, our state and local tax burdens are among the lowest in the country.

FACT: Tennessee added 3.7 percent more jobs over the past year to rank as the top state for small business job growth.

Anchored by growth of Memphis-founded brands FedEx, AutoZone, ServiceMaster and St. Jude Children’s Research Hospital, Memphis, Shelby County and the surrounding region have experienced steady growth for a decade with a recent acceleration in projects that will thousands of new jobs to the region. The region is also home to operations of more than 100 Fortune 500 companies.

With a regional population of nearly 5 million people, the Greater Memphis region offers a continuous and strong talent pipeline. As the largest metropolitan job center within a 150-mile radius, Metro Memphis is the economic hub of a three-state region that includes Tennessee, Arkansas and Mississippi. The MSA population is approximately 1.3 million. The 12-county region spanning three states is home to one of the largest and most diverse talent pools in the Southeast.

More than 62,000 students in the Greater Memphis region are enrolled in four-year and community colleges. With 39 colleges and universities and 35 Technical Training Programs in a 150-mile radius of Memphis, the city is a magnet for the region’s talent.

for the next generation to choose Memphis as a place that makes it possible for them to create the work/life balance they crave.

A diverse and affordable housing supply proximate to the city’s center has attracted new investment and interest from Millennials looking to buck the trend of renting and putting down roots.Memphis has the third largest share of Millennial homebuyers in the country according to a 2017 study by realtor.com and was named the second cheapest place to live by CBS News. Abundant housing stock and many urban neighborhoods in the midst of revitalization make it a prime place for individuals and families looking for more space without sacrificing the walkability and convenience of urban living.

In addition, the state of Tennessee has no state income tax.

The low cost of living and tax structure in Memphis translates to a competitive cost structure for businesses and make it an attractive place for employees looking to keep more hard-earned dollars in their pockets.

Memphis is a center for global commerce. Centrally located, 75 percent of the US population is within a 20-hour drive of Memphis. 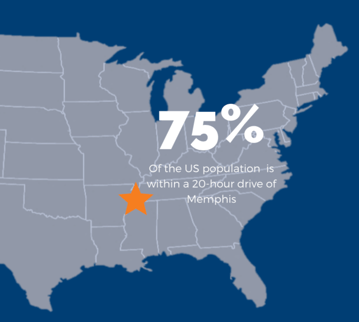 We’re a quadromodel powerhouse with assets known as the 4 Rs – Runways, Rail, Road and River – which represent an unmatched transportation network.

FACT: The US Transportation Department Recently awarded Memphis a $71.2 million grant to upgrade Lamar Avenue. Lamar is one of our nation’s most multimodal freight corridors linking interstate highways, airports, maritime ports and rail.

In addition, the Port of Memphis landed a $1.7 million grant to add new railroad tracks at the public terminal on Presidents Island, giving Presidents Island the potential to serve unit trains – a huge benefit for our logistics infrastructure in Memphis. This grant is expected to increase rail capacity about 15 percent and clear the way for unit trains of 100-plus cars to access the island.

As one of the most fiscally responsible states, Tennessee operates with a healthy surplus rather than a deficit in the state budget.

Our Fiscal Strength and Efficient Government make Memphis a prime target for companies looking to relocate or expand in Tennessee. Our AA credit rating– one of the best of the metro areas in our state – shows we are dedicated to fiscally responsible government.

Entrepreneurship is part of the Memphis DNA.

Innovators, groundbreakers, music-makers; and world-shakers come to Memphis to bring their ideas to life and make their mark. Memphis is a place where creativity, philanthropy, and business entrepreneurs collide.

Memphis has made aggressive moves to create an entrepreneurial ecosystem that’s second to none. Though tech is the primary driver, we’re launching successful companies across a spectrum of industries – from home services to food to music – that will change the future.

Funding by the Greater Memphis Chamber’s Chairman’s Circle – Epicenter is a world-class entrepreneurial hub that connects and coordinates innovators with the support they need to start, launch and scale their businesses.

Memphis boasts one of the most diverse populations in the state of Tennessee.

We’re a city dedicated to diversity and inclusion.

The Entrepreneurial Ecosystem in Memphis helps women and minority-owned businesses grow and thrive.

RISE OF THE REST: In May 2018, AOL Founder Steve Case brought a busload of investors on a 12-hour whirlwind tour of Memphis as part of the Rise of the Rest Tour, showcasing our city’s entrepreneurial ecosystem to a dynamic group of investors interested in funding promising startups in cities located outside the traditional Silicon Valley tech scene.

The Chronicle of Philanthropy named Memphis the world’s most charitable city in 2017.

Of all charitable causes from the nearly 400,000 families in metro Memphis totaled 5.6 percent of gross personal income from 2015-2016, up from 5.1 percent in 2014. In fact, Memphians give to charity at a rate almost twice the national average.

Giving back is so important to the next generation of leaders and Memphis’s robust and sophisticated nonprofit structure provides easy plug-and-play opportunities for individuals and companies to give back.

FACT: 80 percent of all charitable contribution dollars remain in the Greater Memphis region, which is home to more than 4,000 nonprofit organizations.

Getting connected to opportunities in Memphis is a breeze.

Interested in making a move to Memphis? Check out the Greater Memphis Relocation Guide for more information on the livability of our city.

Interested in relocating or expanding your business to the Greater Memphis region? Contact our economic development team here.